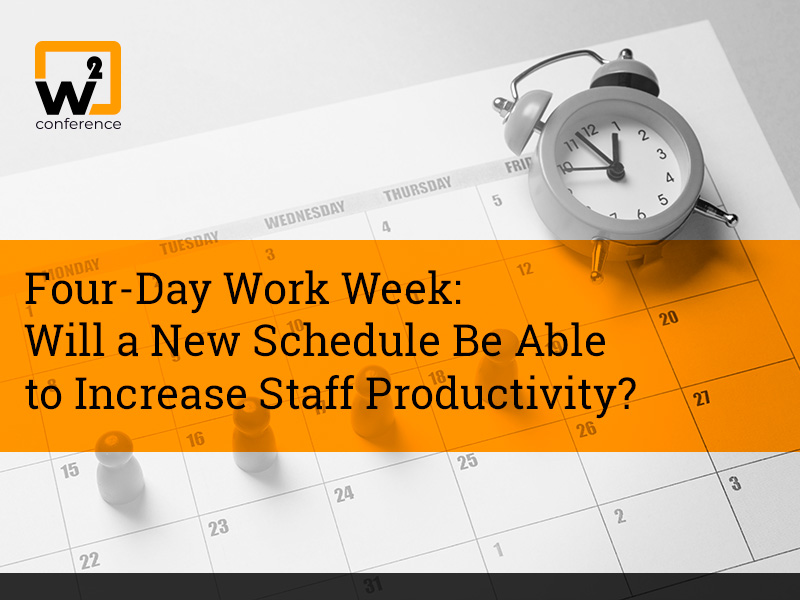 Currently, companies of different sizes and focus areas are taking measures for creating comfortable labor conditions. One of the ways to solve this task is to reduce working hours to four days. Such an innovation is expected to make employees more productive and stress-resistant, as well as to enhance their engagement in the working process.

What are the pros and cons of the four-day work week? What countries have already adopted this schedule? Could Russia follow this approach? These issues are revealed in the article.

Working time reduction is a historical process originating in various countries in the 20th century and lasting till the present day. It is encouraged by numerous factors: the workforce fight for their rights, production automation, technology development, etc.

To improve personnel and business performance, companies from multiple countries are creating comfortable labor conditions and establishing corporate well-being. To reach these goals, some of them decrease the working week to four days.

There are two main models of this work schedule:

The advantages of the 4-day work week include:

The disadvantages of the four-day work week include:

Let’s examine the best practices of companies who have tried to shift to the four-day work week.

In 2019, Microsoft’s Japanese subsidiary conducted an experiment where all employees shifted to the 4-day work week with the same salaries and vacation period. At the same time, the company cut the duration of meetings while face-to-face contacts were replaced with online messenger communications.

It turned out that employees took sick days and time offs rarer because of the new schedule. The labor efficiency grew by almost 40%. Besides, electricity consumption in the office decreased by 23% and printing paper expenditures by 59%.

The UK-based Trade Union Council has supported the reduction of working days. The organization stated that a shorter work week along with the adoption of new technologies would allow to enhance personnel performance and increase business revenues. The Labour Party also commented on the introduction of the short work week.

Moreover, British companies engaged in various sectors tried to apply the new schedule. Some of them succeeded in this experience while others did not.

Henley Business School surveyed representatives of 250 companies adopting the 4-day work week. It emerged that this approach to the work week positively affected the staff working ability and the general team atmosphere in more than 60% of cases.

Meanwhile, Wellcome Trust Foundation refused the shortcut work week because of many operating difficulties faced during its implementation.

Is it possible to apply the reduced work week in Russia?

Russia decreased the duration of working weeks and hours gradually. A working day was reduced to 11.5 hours and a six-day work week was introduced in 1897. During the World War II, one imposed obligatory overtime hours. A law on the five-day work week was adopted in 1991. Weekly staff workload should not exceed 40 hours. This rule is relevant in the Russian Federation as of today. However, the country is discussing the possibility for decreasing the working time.

In June 2019, Former Russian Prime Minister Dmitry Medvedev suggested that society would shift to the 4-day work week in the future. In that summer, he ordered the Ministry of Labour of the Russian Federation to assess how the work week reduction could affect job performance and social matters.

Maxim Topilin, the former Minister of Labour, said that the adoption of the 4-day work week took lots of time and Russia could implement such an approach only in 40-50 years.

Russian experts have diverse views on this issue. Lyudmila Ivanova-Shvets, a representative of Plekhanov Russian University of Economics, mentioned that the decreased work week should lead to better staff productivity. Wasting less time on work trips, people will have more opportunities for self-advancement and communication with relatives. Nevertheless, the expert believes that this schedule will have a positive impact only on those specialists who are currently engaged in companies complying with all necessary labor conditions. Employees with irregular working hours won’t feel the advantages of the new approach.

Alexey Zubets, the head of the Institute for Socioeconomic Studies of the Financial University under the Government of the Russian Federation, notes that one can reduce working hours only in case of labor productivity growth. Otherwise, the reduction of working hours will result in the GDP decline. The expert thinks that the Russian Federation has no prospects for a significant increase in this aspect.

Russian society does not have a single opinion about the shortened work week. According to a survey by the All-Russian Public Opinion Research Center, 48% of the respondents are against the 4-day work week. They reasoned such an attitude by the fact that this approach could lead to lower salaries and worse living standards. 29% of the research participants support this initiative. They suppose that the new schedule will encourage better health and allow people to devote their time to their relatives.

Details of the efficient methods for increasing job performance and providing personnel well-being will be discussed at w2 conference Moscow to be held on March 19. The event will bring together qualified experts to talk about the importance of health maintenance at a workplace and share successful case studies of adopting WW programs.

Are you interested in books about HR features, career and personal development? Find the best of them at the stand of MIF (Mann, Ivanov and...

Stress is a state of psychological tension that lasts for a long time and causes some unpleasant emotions. Stress can be both positive and n...

How are employee engagement and business performance related? What factors influence the level of happiness in the team and what methods hel...

How do wellness and wellbeing programs help businesses to develop in the CIS countries? What solutions are available in the modern market? L...

How To Make Employees Happy? Find Out at w2 conference Moscow From Customer Service and HR Strategies Coach Alena Angelcheva

How to establish an inspiring and productive corporate culture in the company? How to improve the team and make people happier? On March 19,...

w2 conference Moscow – an event dedicated to corporate wellness and its benefits for business is shifted to April 28, 2020.

Who will become a speaker at the conference?

Learn about all speakers from our newsletter.

By subscribing to the newsletter, you agree to the processing of your personal data.